I am looking forward to writing to you in 2014.  I have now said farewell to Hildegard and nominated you, wise and wonderful woman, as recipient of my correspondence this year. I am trusting writing to you will lead me on in my pilgrimage.

This will be a year like no other, each day inviting me to embrace the magical and mystical qualities the cosmos has to offer. I don’t have the power to predict the future as you were famous for, but I can forecast that I will be open to the new year whatever it brings to me.

I thought I would start by connecting myself to something in your story.

The night before the eviction was to take place her dead husband Tom visited her and told her that when the police arrived the following day to tell them to: “Stay where you are”, and they would leave and return no more. Thus the following day when they arrived, Biddy said the words her husband had told her to say and the five policemen and sheriff were stuck to the roadside for two hours being unable to move. After two hours Biddy told them to go away and never return, and the lock which Biddy had put on them was broken and they ran off with their tails between their legs never to bother this lady and her magical powers ever again.

Your story resonates with the power of staying put.  The ancient song: “like a tree planted by the waterside, we shall not be moved” comes to mind, as does the Occupy movement. Standing still and not moving is such a powerful expression as history has shown more than once. (I think you would have liked Rosa Parks.)

I had a similar experience once.  A landlord sold the house we were renting, changed the locks while we were out and moved another tenant in while we were still there! An extraordinary set of events that concluded in the Tenancy Tribunal.   I was pregnant with our second child, we were living on a wage less than social security payments and had a child under two in tow.  We had an eclectic collection of family and friends who rallied around to help us move, to deal with the hysterical new owner and the exceedingly ignorant and legally challenged landlord. We entertained the neighbourhood the day it all unfolded. Our local Police were very helpful.  Lessons learnt about tenants rights, social capital, family and housing provided a backdrop for my continuing social work studies and added to the foundations of my formation in liberation theology and social justice. 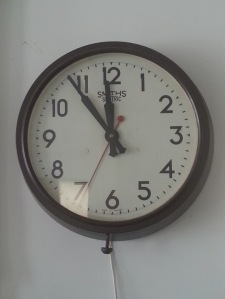 One of my enduring memories of that day was seeing my father-in-law unscrew an old railway clock.  I had always admired this clock and it came into my possession on my 21st birthday the year before the displacement.   The clock was in my father-in-law’s shed covered in cobwebs. I asked if I could have it and he polished it up, gave it to me wrapped in newspaper, completely bemused why anyone would want such a timepiece. It is an electric clock, and on house moving day, given he was electrician, it fell to him to free the clock from the home we were no longer to occupy.  His skills and tenacity to take it off the wall were in demand that day.  He rather enjoyed being a little careless and hacking the wall on which it hung to annoy the landlord and the new owner.  The fact they were from different ethnicities to him meant his racism fuelled the indignity of the moment!

The clock has travelled to each home and continues as a major feature in our lives.  It has ticked through loss and grief, joy and delight. It has kept watch over every meal prepared and now runs on solar energy.  It will never be evicted.  It has stayed put in our lives, a constant.  When the power goes off and it needs to be reset, the hands require adjustment by going backwards first, before they can go forwards.  I love this little dance it does to remind me that it has missed a little of the past so has to accommodate that reality before it can start-up again.

Being expelled takes you to a new place, to look in from the outside. Being thrown out and rejected may be cleansing – so much so you wonder what you were doing there in the first place!

The clock stays the course. Keeping vigil over the household’s comings and goings, expelling the seconds, minutes and hours of each day, evicting me from the past and leading me to the future; empowering each tick with the bell of mindfulness of the gift of the present.

Living in the now is a great gift, Biddy and I think you had it in spades, creatively enabling each moment to serve you so you might align yourself with the healing powers of plants and constellations. 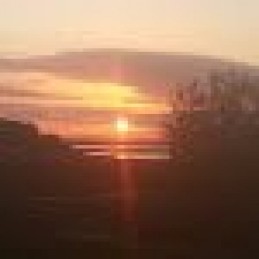 Yeats referred to you in his poem The Shadowy Waters:

and later in the same poem, posed the question: Is Eden out of time and out of space? This question is more relevant than ever and the clock in the kitchen may well be asking the same question.

So Biddy Early, I hope you have some healing to offer our planet, in much the same way you offered those who appeared on your doorstep. We might all be faced with eviction from this Eden as the clock tells us it is minutes to midnight.