One of your famous qualities was disobedience, a refusal to pay homage to money or men, institutional order. Growing up with Irish and Scottish blood in my veins and an oral history of a Greek man jumping ship it seems reasonable that a healthy disregard for authority is part of my DNA. This quality has not skipped a generation and has played out in courts and conversations in more than one jurisdiction.

Refusal to obey authority is central to one’s own health and dignity it may also be vital to birth a new generation of justice and peace.   Howard Zinn remarked that historically the most terrible things have occurred in history because of obedience not disobedience, and while there is a need for order to support civility, so there is the need for civil disobedience.   To speak up when the dangerous and bullying behaviour of authorities bring a civilisation to the edge of its own humanity.

In the luxury of a long lunch at an Italian café, I was in a conversation that was drawing a direct line from the decisions and rhetoric of elected leaders of today to a German government equally elected from a party formed a hundred years ago. I invoked the mantra of the RSL “Eternal Vigilance” as their constant attention to who they see is the enemy of democracy has a lot to offer those of us who stop paying attention or slip into the comfort of a cappuccino.

In doing some deeper research into that mantra I have discovered the phrased morphed from Irish lawyer and politician John Philpot Curran‘s original:

The condition upon which God hath given liberty to man is eternal vigilance.

(and fascinatingly, Marx recommended Engels read Curran’s speeches to get instruction from a people’s advocate.)

To obey means to turn to hear … and so disobedience may in fact be to listen to an inner authority and turn to hear what the still small voice calls you to and sometimes that voice is very loud and can get you into trouble. Bricks through bedroom windows, graffiti and abuse in public, vilification in the media, some of the sounds and messages passed on as well as songs of justice and peace, laughter and love. It is a very small price to pay in my part of the world for someone with my colour, education and economic status.

To name these times, to show and tell, to explain and help discover what is at the heart of what it means to civil is an everyday discipline: a constant practice that needs exercising.

I pay my deepest respects to all those who stand up, speak out, play and silently act in solidarity and hold vigils. I call on those ancestors of mine to breathe their courage into me so I might do the same and practice eternal vigilance. 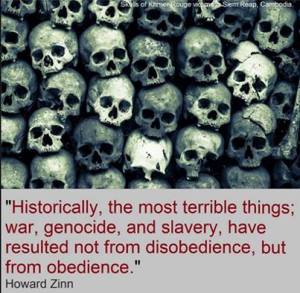